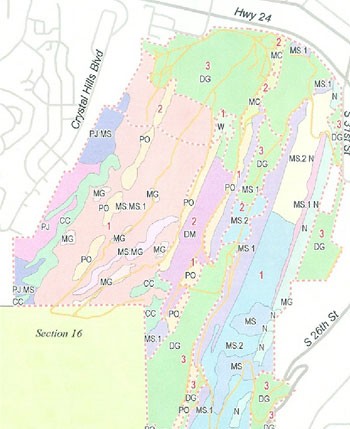 The biology of the Red Rock Canyon area is strongly influenced by the underlying geology and by the terrain which has been largely defined by the geology. The relation of the biology to geology is demonstrated strikingly by comparing the vegetation map shown below to the GEOLOGIC MAP.

The artificial lakes (W) offer some riparian habitat where geese and herons can be seen. Cottonwood and aspen grow in the bottom of Red Rock Canyon above the lakes (DM). The cooler more shaded canyons, of Red Rock Canyon Open Space provide a suitable environment for “cool conifer” forests (CC) of Douglas fir and ponderosa pine, while the dry sunny Fountain formation slopes nearby support stands of pinon and juniper characteristic of the arid Southwest (PJ). Away from the cooler canyon bottoms, but where the underlying rock and soil retain enough moisture, there are stands of ponderosa (PO). Except for the disturbed areas (DG), much of the rest of Red Rock Canyon Open Space supports shrub land vegetation (MS) dominated by Gambel oak and mountain mahogany, with interspersed areas of grassland (MG). Yucca, prickly pear, and pincushion cactus are abundant in the grassland areas. Toward the east side of Red Rock Canyon Open Space, the high limestone content of the soil is a determining factor in the ecology (N).

Some 600 species of plants are known in the area. Common types in the valley floor include wild flowers, spiderworts, dogbane, yucca, and sage. Morning Glories are easy to spot in red rock niches, with its thick low leaves and flowering stem.
Horned Lizards are a familiar sight, as are rabbits and ground squirrels. Deer are occasionally seen prancing the fields. During rare spring and summer rainstorms, tiny toads can be seen emerging from pools of water.