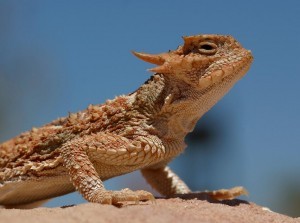 Informed by a little maturity and education, I surmise that the range of horned lizards in my old neighborhood was limited by differences in the color of the soil. The “soil” around Midland School is Pierre Shale which is a slightly brown shade of medium gray, almost the color of our horned lizards’ backs, which provides a good background for the lizards’ camouflage. But, as the horned lizards might venture onto the yellow shale and white limestone of the Niobrara formation or the somewhat orange colored alluvial gravel they would be easily seen by potential predators. My recent reading of the little book “Horned Lizards” by Wade Sherbrooke has tended to confirm this. Sherbrooke devotes considerable attention to the horned lizards’ camouflage and its importance to their survival: Color is one important factor; and different populations living in environments with different soil colors have developed different skin colors. The low profile of the pancake shaped horned lizard also helps to make the lizard less visible to predators since it casts very little shadow. The edges of any shadow which would indicate the shape of the lizard are softened by the effect of a fringe of enlarged scales along the margin of the abdomen of most horned lizards. And, the patterns of darker coloration on their backs makes it more difficult for predators to recognize horned lizards by their shape.

Whether the horns of horned lizards are short or long, they offer another defense against predators, making horned lizards difficult for birds and snakes to swallow. One more defense which some horned lizards have is the unusual ability to squirt fine streams of blood from their eyes. Only a few species are able to do this; and our short horned lizards are not among the species endowed with this capability.

In the evening, horned lizards wiggle their way into the soil or sand and spend the night buried for protection and warmth. Winter, to the horned lizard, is like a very long night during which the buried lizard hibernates.

Horned lizards mate in the Spring after coming out of hibernation. Our short horned lizard mothers carry their fertilized eggs to term and give birth to baby lizards after a gestation period which can last up to three months. A mother short horned lizard gives birth to her babies one after another with only a few minutes between births. And, she may give birth to as many as four dozen babies. At birth the babies are surrounded by liquid encased in a transparent membrane. A minute or so after birth, they struggle to break through the membrane and take their first breaths. Within half an hour after birth the baby short horned lizards are fully active and on their own.

With Bott Park now covered by sod and the horned lizards’ roadside homes having been usurped by curbs and sidewalks, the Westside urban habitat of the horned lizard has been reduced over the years. The eastern edge of the Red Rock Canyon property, along the base of the hogbacks, is still a place where we will be likely to find horned lizards.