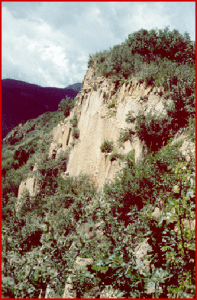 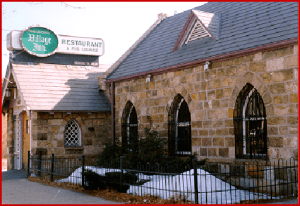 In 1859, Anthony Bott was one of the founders of Colorado City. Over the years between the founding of Colorado City in 1859 and Mr. Bott’s death in 1916, Anthony Bott engaged in a variety of enterprises, including road building, real estate, farming, limestone mining, cement manufacture, and the quarrying of building stone.

Photos and lithographs of Colorado City suggest that the first stone building in town was built within two years of the founding of Colorado City; and one historian has suggested that this building may have been built to promote Mr. Bott’s building stone business.

The stone which Anthony Bott quarried was Dakota sandstone. The quarries were located on the east face of the Dakota hogback (the highest ridge in Red Rock Canyon Open Space) about a mile and a half south of Fountain Creek. Although these quarries were apparently operated in the 1860’s, most of the land where the quarries were located did not become privately owned until it was obtained by John Langmeyer as a homestead in 1875. John Langmeyer was Anthony Bott’s business partner in the building stone business and also Anthony Bott’s brother-in-law. According to the Colorado State Business Directory, the business was known as Bott and Langmyer (sic) Building Stone. After John Langmeyer’s death in the summer of 1880, Anthony Bott continued to operate the stone quarries. Apparently Mr. Bott thought highly of his brother-in-law and business partner. In 1889, nine years after John Langmeyer’s death, a street in Bott’s Addition Number 4 to Colorado City was named Langmeyer Street.

Depending on the location where it was quarried, stone from the Bott quarries ranges from cream colored to tawny yellow to light brown. One identifying feature often seen in this stone is round, brown ironstone concretions. (One of the stones near the northeast corner of the Midland Railroad Roundhouse, which contains a particularly striking cluster of these concretions.)

Notable local buildings constructed of this Dakota sandstone include the Midland Railroad roundhouse (formerly Van Briggle Pottery), the Glen Eyrie Castle, the old church next to the downtown Colorado Springs Post Office (now the Village Inn), and the stone part of the Cog Depot.

The faces of the Bott quarries are still plainly visible as light colored faces on the east side of the Dakota hogback toward its south end. A particularly good location for seeing these faces is the western part of the mesa area in Bear Creek Regional Park. From that area in mid-afternoon, when the light is right, the work areas and wagon roads are also plainly visible.